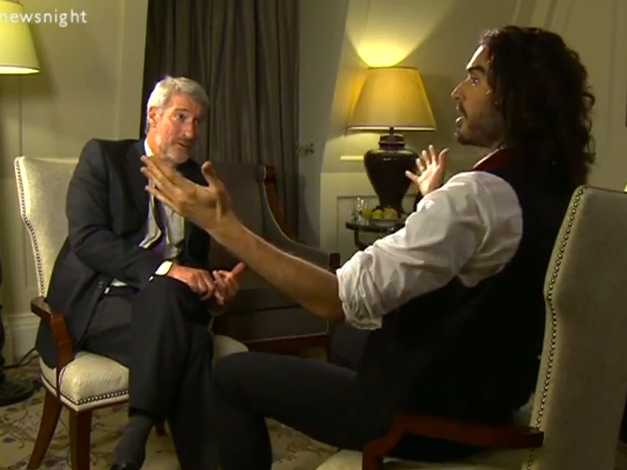 On a Saturday morning, I was sitting with a friend at our favorite bench and grading papers. “Check this,” he said, turning his laptop around for me to see. “Russell Brand totally nails this guy on why voting is wrong.” At face value, I find Russell Brand’s humor shruggable. Humorous? Enh. Amusing? Sure. Funny? Not really. But as I watched the interview between Jeremy Paxman and Brand, I came to appreciate him not as a comedian or celebrity with a functioning right brain, but as someone who was mature enough to make decisions for himself, even if they were unconventional and, as his interviewer called them, “rather chaotic.” Sacreligious as it may have been, as I sat there hunched over my friend’s Macbook, holding the earbuds tightly, I found myself wondering if this was at all what it must have been like for the Hebrew prophets to vocalize their opposition to leadership over the centuries. Was it, at all, similar to the narratives that the Gospel writers crafted which presented John the Baptist and later Jesus at odds with the power structure of the First Century?

From the cuff, Brand goes on the offensive. “I don’t get my authority from this pre-existing paradigm,” he said, arms gesticulating in an attempt to grab from thin air… what exactly? Common ground or meaning? “Which is quite narrow and only serves a few people. I look elsewhere for alternatives that might be of service to humanity… Meaning alternative political systems.” Diving into discussions of any kind regarding an ‘economy of G-d’ as some idealized way that things should be, be they tikkun olam, Kingdom of G–d, Republican or Labor Party, we are bound to resurface with a sense of hopelessness. Something never entirely adds up. That is, we know something is broken with our political systems and want something better but, deep down, fear the alternative. Brand’s interview is at least honest in this way – when questioned, he tosses his hands up and admits he has no alternative. Just because he doesn’t vote, that doesn’t mean he is disqualified from imagining something better. In fact, from his position, it gives evidence to how strongly he rejects the current system – he refuses to participate where it is legally permissible to do so.

It is notable, I suppose, that Jesus never attacked the political system of Rome as a system. He doesn’t even go so far as John the Baptist. In Luke 3, there is an account of tax collectors and Roman soldiers visiting John and asking what they should do. This would be a perfect opportunity for John to require them to corrupt the system from within, to quit their jobs, or even emulate Joseph, Esther, or Daniel’s rise to prominence within the palaces. Instead, John tells them to collect only what they are required to collect, not to extort people, and (given this constraint) to be satisfied with their wages. Perhaps this was John’s way of putting the oppressor into the experience of the oppressed and create a condition to realize their sins and repent. Given a similar opportunity, Jesus tells his followers to give the system what is rightfully theirs and be done with it (Mk. 12:16; Lk. 20:35). But then he adds that we are to give to G-d what belongs to G-d.

This has always struck me a secondary statement. Give to G-d what is G-d’s. What did that even mean to those who first heard it? How did such a throw-away clause survive in the Early Christian communities? Paul will echo this sentiment a few decades later when he addresses the Romans. People of faith are not to be conformed to this present darkness through political affiliations, hung up on what leaders are doing. They will fail us, do terrible things, and brings us right along with them. The prophet Samuel makes this clear enough (I Sam. 8). It seems as though the leading names in scripture are unanimous on this – leaders will absolutely fail us. But more than that, the system is always rigged to favor the ones who continue it – which is what Brand was so emphatic about with his interviewer and which was so easily dismissed as “trivial.”

Rather than get hung up on such “trivial” things as the exploitation of global resources, wide economic disparity, government bailouts of tyrannical loan companies, oligarchies, and the bloated cost of simple healthcare, perhaps prophetic chaos is our only way out. To categorically reject all forms of oppression by non-participation and non-engagement. Historically, we know this will not go over brightly and that every form of coercion will be used to justify violence against peaceful efforts. Martin Luther King, Jr. was arrested in Birmingham not for protesting or even rejecting the power structures which sought to force him into subjection. Rather, he was jailed because he did not have a permit to protest the system he was rejecting. Yes, it seems entirely counterintuitive to reject these systems in small, insignificant ways by electing not to vote, to not purchase things we are told we need but don’t truly desire, to grow a garden on our balcony, and electing not to contribute to the medical monopoly. These decisions seem counterintuitive to us only because we are acclimated and inoculated to Things As They Are instead of how we know intuitively that they should be. Yes, every inaction brings us one step closer to the chaos our parents and teachers have conditioned us to avoid and reject. Yet it is here, in this mental landscape of idealism and hope, that we must continue ever onwards towards this “Brand” new way of thinking… regardless of whether anyone else gets the joke.

For the full interview discussed in this article, please click here.